Doogie, a twelve year old Staffordshire bull terrier cross, and his family did not have the best start to the new year of 2020.

His owners started to be very concerned about him when he did not want to leave his bed one morning. He was extremely lethargic, which was not like him at all. Even more concerning was his constant shivering. An appointment was made to see our lovely veterinary surgeon Emma. 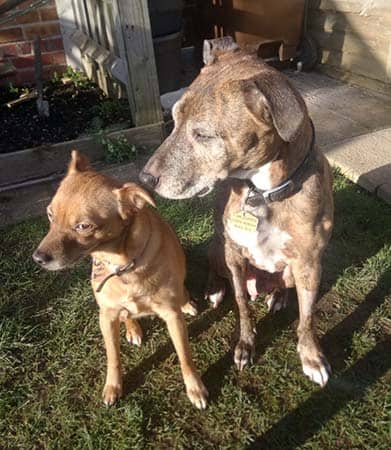 His vital signs were all within the normal range, however Emma could see that Doogie was very unwell. He was very tense around his abdomen.

We started with blood tests and we collected a urine sample to help us to figure out what might be wrong. His blood test revealed some abnormalities, a lack of red blood cells and haemoglobin. This could have been be due to multiple illnesses, and so to rule some of them out we took x-rays and an ultrasound scan of his abdomen. We placed an intravenous catheter in his leg and gave him a higher dose of fluids to help stabilise him.

Sadly, the images confirmed that he had a growth on his spleen. The vet was concerned that this may have ruptured and that he had blood in his abdominal cavity. It was a life threatening situation for Doogie, as the internal bleeding can quickly send an animal into shock.

We took him to theatre immediately, and performed an emergency operation. It was confirmed that the 8cm large mass had ruptured and that his abdomen had filled with blood. The surgery went very well, the mass was removed along with the rest of the spleen and his abdomen sutured closed.

After the surgery he was closely monitored by the nursing team. The nurses followed the strict treatment plan which was tailored to Doogies needs, ensuring he was kept as comfortable as possible after this major surgery. We kept him on intravenous fluids to keep him hydrated and to make up for his blood loss.

Considering his age of nearly 13 years and his poorly state on arrival he recovered very well. The next day he was able to walk already by himself in the garden and back to his kennel. Hour by hour improvement could be seen; he was getting brighter and enjoyed the attention from the nurses. Doogie was a gourmet dog, the only thing he would eat was processed meat and being hand fed.

A couple of days after his surgery, he left the hospital well and truly spoiled. We saw him regular for post op checks to ensure his wound had healed nicely. Shortly after Doogie got the all clear from our vets and was officially discharged.

We are all very pleased to hear Doogie is doing so well and is back to his normal self.