Duke and Poppy have been chosen to receive the Braveheart award in recognition of the bravery that that they have shown when coming into the practice to be neutered. At the clinic we make preparations well in advance for this day, Poppy and Duke are members of our VIP club and had already visited the practice for vaccinations and regular flea and worming treatments. 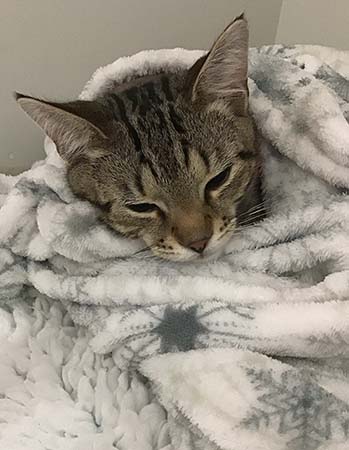 We recognise that this can be a stressful time for owners and kittens therefore this is an advantage, as they are already familiar with the experience of coming here. Duke and Poppy, a pair of five month old kittens, were admitted during a consultation with the nurse, a consent form was discussed and signed and then they were transferred to the cat ward. As you can see in the photos, the kennels are spacious and the pair were soon settled in together. A familiar item from home (a blanket) was kept with them for re assurance. The practice also uses feline pheromone diffusers, pet remedy calming products and the cats have soothing cat music playing quietly in the background. 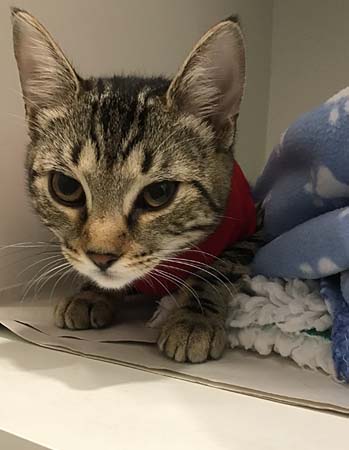 Both kittens were examined by the vet then they were sedated and had their procedures carried out under general anaesthetic. They both had microchips implanted at the same time and recovered uneventfully. Microchips are included in the VIP scheme and a discount is applied to the cost of neutering.

The first thing that they wanted to do when they had recovered was eat some food, then they were returned to each others company to spend the rest of their stay together. Duke and Poppy’s owners were contacted to let them know that everything had gone well. After a period of monitoring to ensure that they were comfortable, Poppy and Duke were discharged.

At that time a nurse went through the homecare that was required and advised on giving the post op pain relief medication that was dispensed, a homecare sheet was also provided to re iterate this. A follow up phone call was done the next day by a nurse to check that Poppy and Duke were alright, three days later they came in for a nurse check and again in 10 days for a final check.

Poppy and Duke were chosen as our Bravehearts’ as they were fantastic patients and we thought that although they had routine procedures we needed to recognise how brave these little kittens were. Moor Cottage is aware of this and we do our utmost to make this experience as stress free as possible. We are very fortunate to be able to offer a bespoke cat clinic and are proud to hold the ISFM gold standard of cat care accreditation.