Due to COVID-19, this practice is physically open for urgent and emergency cases. All other assistance will be provided via telephone advice or video consultation, where available. To access this service please call us. Click here for further information.

Lucy originally visited us in April for her annual vaccinations. Her owner mentioned they had noticed some lumps on the underside of her abdomen that they wanted veterinary surgeon Sally to check. The decision was made to take some fine needle aspirates – a diagnostic procedure used to investigate lumps or masses by inserting a needle into the lumps to retrieve some cells to send for external testing.

The results were received a few days later showing evidence on mammary neoplasia (tumours of the mammary gland). It was then advised to operate On Lucy and remove the affected tissue to prevent it from spreading further. Due to the Lucy’s operation being quite traumatic, the veterinary surgeon Sally planned to stage the operation by doing one side at a time.

Before starting on the operation, Lucy had radiography imaging of her chest to ensure the lump had not spread to the thoracic cavity as breast cancer can do this, luckily it had not. Sally then proceeded with the right mammary strip operation removing the lumps and the mammary tissue on the right hand side.

Following the procedure Lucy was monitored closely by the hospital nurse until she had fully woken up and was offered food. Lucy stayed in over night for monitoring and pain relief. The following day, hospital nurse explained to her owners what medication she needed and how to care for her in her recovery period before she was discharged. 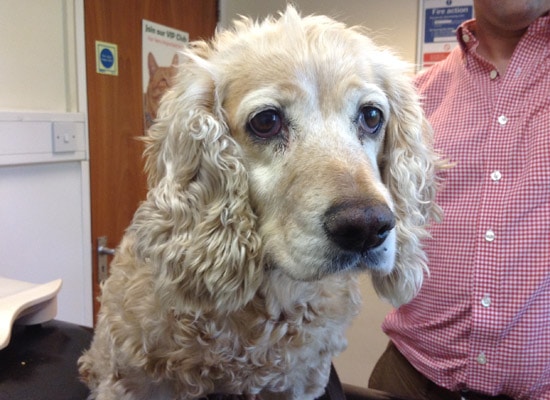 The following day, Lucy was seen by Sally to ensure she was comfortable and to check her wound, which looked very good. Lucy’s owners followed all advice very carefully by keeping her strictly rested during her recovery and not allowing her to get to the wound. As a result of this, Lucy’s wounds healed perfectly.

Lucy’s second operation was booked for 1 month’s time where she had the same procedure to remove the mammary tissue from the left hand side.

Anaesthetising and operating on a canine patient of Lucy’s age can come with many risks. Older animals can often take longer to come round from the anaesthetic due to a slower drug metabolism, The patient is more at risk of becoming hypothermic under anaesthetic, wound healing can take longer and other health issues can often interfere as well.

Lucy coped incredibly well during both of her operations and recovered very well! She was very brave during here time here at Moor Cottage Veterinary Hospital and we are all so pleased to see her doing so well post operatively.