To book an appointment or to access one of our services, please contact us. We can now offer a range of services for our patients, while still adhering to COVID-19 social distancing rules. Please click here to find out more.

So much so, that he swallowed one!! 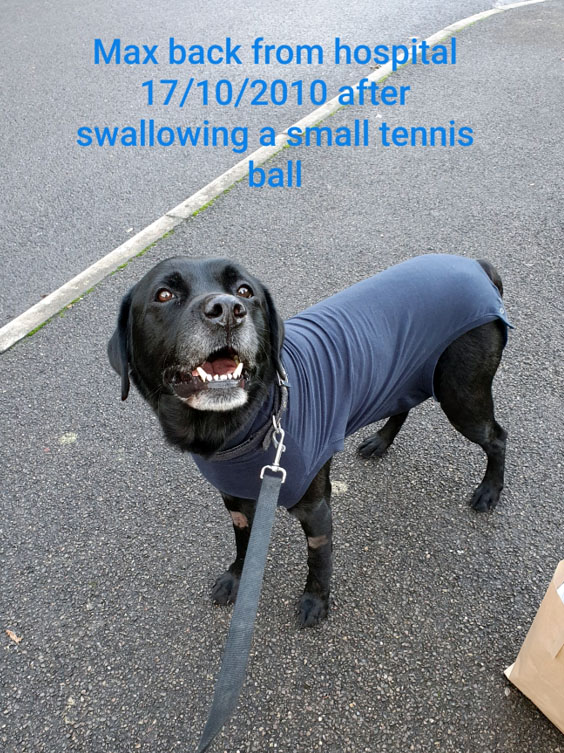 Max was having a lovely day chasing tennis balls (his favourite game!) when he chased a small tennis ball (ping pong sized) that had been thrown for one of his doggy friends to chase! Max decided he wanted to chase it, and he accidently swallowed it!

3 days later, Max started vomiting and producing diarrhoea. His owner was unsure whether Max had vomited the tennis ball back up, or passed it in his faeces. So he came in to see us….

We placed Max under a general anaesthetic and took an x-ray of his abdomen, which showed the small tennis ball!

We gently passed a scope (a device with a camera and grasping forceps) down through Max’s mouth into his stomach, whilst watching every step on the TV screen. We located the tennis ball, tried grasping it with forceps and attempted to remove it, but unfortunately we were unable to pull it through into the oesophagus as it was too slippery, so therefore Max had to be taken in to theatre….

Max had a midline incision made in to his abdomen and the tennis ball could be palpated in his stomach. An incision was made and the small tennis ball was removed!

The rest of Max’s abdomen was checked including his liver, gall bladder, spleen, kidneys, pancreas and the rest of the intestinal tract, and nothing abnormal was detected.

Max had staples to close his incision, and a comfy medical pet shirt to wear to protect the site.

After only 2 hours from being back from surgery, Max was bright and happy, wagging his tail, and ate a bowl of food! He continued that day and the next to do really well, was lovely and comfortable and ate all the food he was offered, so Max went home the very next day after his surgery!

At his 3 day check up he was doing fantastic – his wound was healing lovely, he was eating well, doing great and taking his medications fine.
He came in after 10 days to have his staples removed, and his incision had healed beautifully!

Well done Max for being so brave, and a lovely patient to care for!!