Harry is a twelve year old domestic shorthaired cat and a long standing patient at Moor Cottage where his diabetes has been managed since December 2018.

On the 6th of September Harry’s owner noticed that Harry was not himself, he couldn’t walk on one of his hind legs properly and had some wounds on his shoulder. 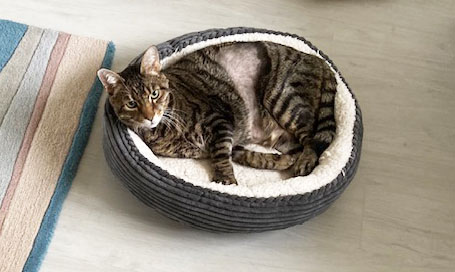 Sally the vet examined him and found a nasty wound on his back leg, the leg was also X-rayed to ensure that nothing was broken.

Harry had a general anaesthetic and surgery to close the wound, due to his diabetes we had to keep a very close eye on him and monitor his blood glucose levels carefully. He also had intravenous fluid therapy to support him throughout.

Harry went home the next day on antibiotics and pain relief.

A couple of days later harry became very unwell and was re admitted to hospital. He underwent intensive therapy as he was not eating and had a high temperature he was also very depressed and not like his usual self at all. The vet Petra was concerned that he might have sepsis. Harry had an ultrasound scan and x- rays of his abdomen in case the wounds were worse than initially suspected.

Harry was unable to get up and urinate therefore a urinary catheter was placed to make him more comfortable. To our great relief Harry did start to eat a small amount of food.

Harry’s hind feet had now become quite swollen and bruised.

We took swabs for culture to see if any unusual bacteria were causing the problem and considered placing a feeding tube to ensure that Harry received adequate nutrition.

The next day we found a small puncture wound on his hind leg from which a lot of foul pus poured out, the original stitched up wound also started to break down.

A feeding tube was now placed which Harry tolerated well.

A slight improvement was then seen over the next few days, Harry could move around a bit more and was starting to eat a bit on his own Also his temperature was returning to normal. On the 16th September we removed his intravenous drip, he was still being tube fed and of course we were still managing his diabetes with insulin injections and monitoring his blood glucose.

From this point Harry began a long programme of wound management having regular dressings and cleaning of the wound. Manuka honey also paid a part in this process.

We have recorded Harry’s progress throughout with photos, as you can see.

On the 20th September after about 11 days in hospital Harry was well enough to go home. He no longer needed a feeding tube and was eating well himself, his diabetes was under control.

For the next couple of weeks he came back in to see the vets and nurses for wound management and re dressing every 2-3 days. Harry tolerated this very well and was always a star patient.

Harry is now being seen weekly, his wounds are not completely healed yet but as the photos show, they are doing really well.

Harry has been through a tremendous ordeal and at times has been incredibly poorly.

The nurses, vets and his owner have done an amazing job and we must not forget that Harry has been a very brave patient, he has never shown anything other than a willingness to let us do our job and acceptance of the fact that we are helping him to recover.

Harry has been the best patient ever and is a worthy recipient of the Brave Heart award.