Due to COVID-19, this practice is physically open for urgent and emergency cases. All other assistance will be provided via telephone advice or video consultation, where available. To access this service please call us. Click here for further information.

An eggstravagant post-Easter feast left a lovable cocker spaniel in need of urgent medical attention at a leading Bracknell vets.

Cocker spaniel Purdi was rushed to Moor Cottage Veterinary Hospital, in Binfield, by her anxious owners after scoffing three large Easter eggs and a bunch of grapes – both of which are toxic to dogs and can cause heart attacks and kidney failure. 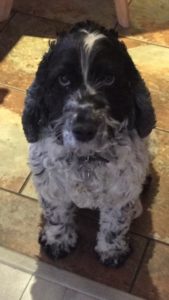 The nine-year-old spent 48 hours on an intravenous drip while being treated by vets at Moor Cottage before finally being allowed home.

Purdi’s owner Rachel Plumpton, from Bracknell, relived the drama, saying: “My daughter Beau raised the alarm after discovering all her Easter Eggs had disappeared off the kitchen table.

“Somehow, Purdi had clambered up on to the table and eaten all three eggs, including the packaging, plus a bowl of grapes and some cherry tomatoes.

“We were shocked. She’s nine years old, not a puppy, and had never, ever done anything like that before but I realised straight away this was a ‘vet job’.

“Purdi wasn’t actually showing any ill-effects but I work for an animal health agency, so know the dangers chocolate and grapes can pose for dogs.
“That’s why we headed straight to Moor Cottage and we’re very grateful for the excellent care and treatment we received there.”

It was veterinary surgeon Olivia Avdis who led the treatment for Purdi, working swiftly to counter the dangers posed by the toxins in the chocolate and grapes.

Olivia said: “We admitted Purdi for treatment and the first thing we did was give her a dose of Amorphine to make her sick, so she’d vomit up some of what she’d eaten.

“It worked, with Purdi bringing up some chocolate and grapes. We then gave her activated charcoal in a bid to prevent any toxins being absorbed into the blood stream.

“Purdi was also given intravenous fluids, had her blood checked and was monitored closely.

“She was sick again in the afternoon, bringing up more food and charcoal, but promptly came in and ate straight away, which was another positive sign.

“She was checked for palpitations and nothing abnormal was detected and there was no obvious distress, she seemed quite comfortable.

“The next day her blood was checked again and we allowed a much-better Purdi to go home.”

Relieved owner Rachel says she has taken precautions to prevent a repeat occurrence. She said: “We now put all chocolate in a box and keep it on the top of the fridge-freezer and make sure all goodies are out of reach.

“When Purdi goes to stay with family and friends we sweep the house to make sure there’s nothing tempting in view or within reach.”