Moor Cottage has chosen Luna, a 4 year and 8 month old cocker spaniel, who came to us through our out of hours emergency service provider VetsNow, as she had eaten raisins and sultanas. 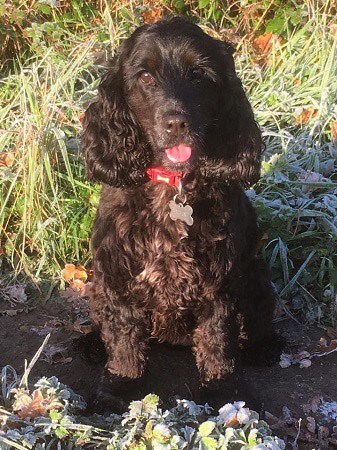 She had ingested three chewy raisin and sultana filled granola bars earlier in the evening and presented a worry to the owner in the early hours of the morning appearing distressed, panting and not weight bearing on her left forelimb. It was was unknown whether this was related to the raisin ingestion but would be investigated. Following a discussion the owner had with VetsNow, she had decided it would be in Luna’s best interest to be hospitalised for investigation and further treatment with them.

Luna was given a drug called Apomorphine, which encourages them to be sick, producing any raisins and sultanas left in her stomach to discourage absorption of the toxin. After initial tests and treatments had been carried out at VetsNow, this included blood tests, Intravenous fluids and pain relief for her limp, Luna’s Owner decided to bring her to Moor Cottage for further investigation and monitoring.

Her treatment following her toxin ingestion was continued, including adding acivated charcoal to help absorb and pass any additional toxins from the gastrointestinal tract, which includes her stomach, small and large intestines and colon. After her initial admission and assessment, she continued to feel sick and appear nauseous so was given a medication to make her feel less nauseous to try and encourage her to feel better. However, while being brave and eating most of her meals in hospital and taking her medication very well, she continued to occasionally vomit her food and medication back up.

Luna’s following days in hospital meant it was time for her to have further investigations and she was anaesthetised for an endoscopy and radiographs for vets to view and to use for continuous diagnosis and treatment.

Radiographs help produce a digital image of the body while an endoscopy means a vet can view internally with a camera any suspicious areas of concern.

She was found to have no foreign material causing any blockages but she did have thickened intestines which supported their diagnosis for gastroenteritis, a term given to thickened and inflamed guts. Further blood tests were performed to ensure continuous monitoring of any changes to the internal organs, such as kidneys and pancreas. Medication to support the gut was also added to protect the stomach lining from the acids which are produced when being sick.

She was continuously monitored by the nursing team, reporting back to the vets of any changes in regards to her vomiting, any loose bowel movements, demeanour, pain levels, hydration levels and eating habits to ensure appropriate changes and additions to her treatment while with us in hospital.

After a long stay of nearly a week, Luna was finally discharged by the vet with medications to further support her recovery. The owner was very happy to have her home and continued to bring her in to the hospital for a few check ups to make sure she was on her way to a fully recovery.