Our chosen brave heart for this month goes to our feline friend Ash, a beautiful Siamese.

Ash was seen by veterinary surgeon Alan for lethargy, inappetence and being generally quite sniffly at home. On his first clinical exam he was pyrexic (high temperature). Ash was given a long lasting antibiotic injection and some anti inflammatories to see if this helped and he went home. 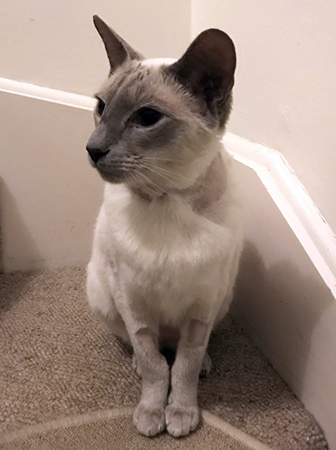 Unfortunately 2 days later Ash was no better and still hadn’t eaten, he was hospitalised, bloods and urine tests were carried out and he was placed on a drip to try and rehydrate him.

His blood test revealed a high level of total bilirubin – a yellow substance made by the blood during breakdown of red blood cells. Higher levels of bilirubin can indicate liver problems.

During his first night in hospital he ate a very small amount of food but due to having not eaten for around 1 week, a feeding tube was placed in order to provide some nutrients for him. Ash has a nasogastric feeding tube placed, which can be done conscious. This is placed up one nostril where liquid food can be given, bypassing the mouth and going straight down the oesophagus. A feeding plan was made for Ash, giving food via the tube every 2 hours. Intravenous antibiotics were also given.

Unfortunately after a couple of days Ash sneezed his nasogastric tube out, which can happen! So he went under a general anaesthetic to have an oesophageal feeding tube placed. This is where a small incision is made in the left side of a patient’s neck area, and a feeding tube is placed and sutured to the skin. A radiograph was taken after placement to ensure it was sitting in the correct place.

Whilst under general anaesthetic Ash also had an ultrasound, this showed his pancreas, intestines, gallbladder and liver to be slightly thickened. A blood test was run to detect changes in the blood reflecting inflammation of the pancreas, and this confirmed suspicions that Ash was suffering from pancreatitis (inflammation of the pancreas). This can be very uncomfortable for any patient, as the pancreas sits nestled in next to the stomach and intestines therefore leading to generalised discomfort in this region and inappetance. Fluids, feeding, pain relief and all other meds were continued.

The following day, Ash’s owners were taught how to give tube feeding as this is something that can be continued at home. After 4 days being hospitalised, Ash was discharged. The following day the owner reported to us he was doing very well at home. He was much happier, brighter in himself and EATING!
One week later, Ash returned for a recheck appointment with Mary. A blood test was taken and his blood results were normal! His feeding tube was removed and a small neck bandage placed to cover the incision. His blood values had improved!

We are all so pleased here at Moor Cottage Veterinary Hospital to hear that Ash is doing so well at home.