Max, a 4 year old male neutered cocker spaniel, was first seen on the 21st December for vomiting, lethargy and shaking. He was seen by one of our vets and after examination some bloods were taken. As the blood results fell within the normal range Max was sent home with gut protectants and anti-sickness medication. At home Max continued to vomit and did not improve so was taken by his owners to Vets Now on sunday evening. At Vets Now Max had more tests including x-rays and an ultrasound of his abdomen which showed shadowing in his intestine. This led to him having an exploratory laparotomy (incision into his stomach) where a peach stone was removed. 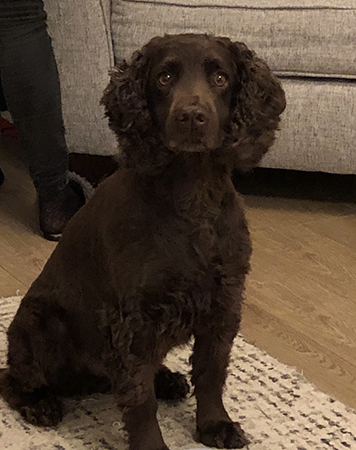 On the Monday morning Max was re-admitted to Moor Cottage. He was still recovering from his anaesthetic and was admitted to continue intravenous fluid therapy and to be given gut protectants, antibiotics, antiemetics (anti sickness) and pain relief medication. His pain was monitored every 4 hours using the Glasgow Acute Pain Scale for Dogs and he was tempted to eat by the nurses. Over the day he gradually started showing more interest in food and became brighter in himself. The following day he was more like his normal self and had eaten a small amount over night. His bloods were rechecked and he was kept in for the day to start on oral medication. As he was taking his oral medication well he was sent home that evening with a post operative care sheet.

Max was seen on the 31st of December for his first post op check. He was a completely different dog and bounced happily into the consult room. He was taking his medication well, eating well and was coping with his mps (medical protective shirt). He was booked in for a final post op check a week later with the owners and were advised to come back sooner if worried. At his final post op check his wound had healed beautifully and long term care including building up exercise was discussed.

We are all pleased how well Max has recovered. Despite what he has been through Max has always been a lovely patient to look after. Well done Max you deserve your Braveheart award.