To book an appointment or to access one of our services, please contact us. We can now offer a range of services for our patients, while still adhering to COVID-19 social distancing rules. Please click here to find out more.

Nacho is a 7yr old Pug, his Mummy brought him in to see a vet as she had concerns over his left eye.

Olivia the Vet examined Nacho thoroughly and unfortunately found his eye had ruptured. 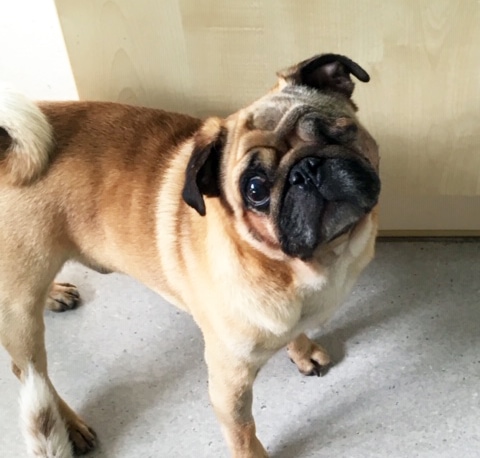 Nacho was admitted to the Hospital for pain relief and he was booked in for surgery the following day.

Nacho was given oxygen prior to his surgery, due to him being a brachycephalic breed of dog. His surgery went well and he was brought back into Hospital for him to recover quietly.

On recovery we put a buster collar on Nacho so he didn’t damage his sutured wound with his feet.

We are pleased to say Nacho went home that evening to recover in the comforts of his own home.

We saw Nacho back 3 days letter for a post op check; his Mummy reported he was eating and drinking well, and coping very well with only one eye. We were very pleased with how his surgical site looked.

Nacho came back 7 days later to have his sutures removed and have lots of cuddles and treats.